A unique cloth from Southern Uganda 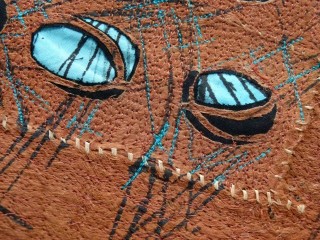 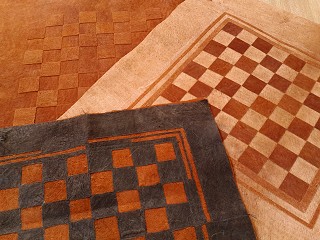 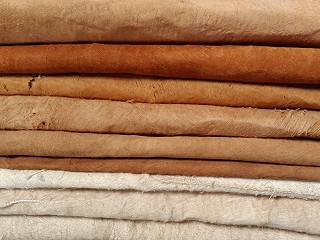 The variety of bark cloth tones and colours

I first discovered bark cloth when visiting Kisaabwa in southern Uganda, and have incorporated it into much of my textile work in recent years. I am currently working on a project with Jose Hendo an Ugandan-born eco-sustainable fashion designer, who utilises bark cloth in her garments, an Ugandan master print maker Fred Mutebi, and Janet Middleton, a professional shoemaker. This collaborative project reflects the heritage, the significance and the importance of bark cloth. Despite its decline over the years the kingdom of Buganda is at last seeing a revival of this ancient craft and our exhibition in Autumn 2017 at the three UK Knitting and Stitching Shows reflects the passion each of the artists share for bark cloth, the environment and wider global challenges. Bark cloth continues to see a revival by artists in Uganda.

Bark Cloth is probably one of the world's oldest non-woven fabrics and comes from the Mutuba tree (Ficus Natalensis) from the Buganda Kingdom in Southern Uganda, as well as from other parts of the world. Baganda craftsmen have been manufacturing bark cloth for the royal family for centuries and it is still worn for ritual and healing ceremonies, for cultural events and funerals and by healers who would have many bark cloth robes within their shrines each of which represented a different god. When calling up a specific god they would put on the corresponding robe. Traditionally it would have been worn as a toga by both men and women, with the women also wearing a sash.

So what is Bark Cloth?

It is a 100% organic fibre and can be described as an organic 'living' cloth which, in the history of textiles is unquestionably the most ancient cloth and the first non-woven textile. Being bio-degradable and manufactured with no added chemicals or textile agents, gives it added attraction. Bark cloth was discovered during the reign of Ssekabaka Kimera, who ruled from 1217 to 1247 and it still remains steeped in mysterious cultural heritage.

Sadly the demonisation of bark cloth by Christianity and Islam and the introduction of other fabrics by Arab traders and colonialists caused the bark cloth trade to deteriorate, and so was the production. The Mutuba trees continued to serve the agro-purpose and some bark cloth was produced for particular Buganda cultural rituals.

See how bark cloth is made by craftsmen in Uganda

How is bark cloth made?

The unique nature and variety of this amazing cloth